The largest earthquake in 40 years hit the border area of Iran and Pakistan. It's magnitude was reported as 7.8

Tremors were felt across the Gulf region, across Pakistan and well into north-west India on Tuesday, when the quake happened at 10.44am GMT.

The US Geological Survey said it had measured the earthquake at magnitude 7.8 and gave its location at 50 miles east-south-east of the town of Khash, in Iran. It is the biggest earthquake in Iran for 40 years.

Though the area is largely desert and mountains, there are several major cities, including Zahedan, 125 miles away, which has more than half a million inhabitants.

One Iranian told the Guardian that the small town of Hiduj, which had a population of around 1,000 according to a 2006 census, had been badly damaged.

The Iranian semi-official news agency Fars quoted Tehran University's geophysics centre as saying the quake had hit the south-eastern city of Saravan in Sistan and Baluchistan province, at 3.14pm local time and reported that it had killed at least 40 people, according to some of their sources. At least seven villages near the city had been affected, the agency said.

Yes, it seems very serious, and unfortunately the death and injury toll will almost certainly rise.

I don't understand the rationale of an ongoing thread on earthquakes - I only clicked on this one because I had read about the Iran/Pakistan quake.

To keep all of us West Coasters trembling in fear of the big one that's coming?

A severe earthquake off the south coast of B.C., which would be followed by a tsunami, would cause nearly $75 billion in damages to buildings, bridges and pipelines.

A 6.6 magnitude earthquake struck off the coast of Port Hardy on Vancouver Island Wednesday night.

According to the United States Geological Survey, (USGS), it struck at 8:10 p.m. PDT and the epicentre was located about 91 km south, off the coast, at a depth of about 11 km. It was originally recorded as a 6.7 but was downgraded to a 6.6 magnitude quake.

Residents in Port Hardy said the ground shook for about 35 to 40 seconds during the preliminary earthquake. Groceries were knocked off the shelves at the local Overwaitea store.

People are saying they felt it as far away as Langley and Kelowna....

Oregon has already turned a corner because institutions are no longer asking,"Why should I do anything to prepare" and are now asking,"How do I pay for the preparation I know I need?"

Friday, November 14, 2014, 6:11 PM - An earthquake swarm that has been rattling a remote area of Nevada since the summer has intensified this week, geologists announced Wednesday.

The swarm began on July 12 and is being caused by the stretching of the Earth's crust, The Nevada Seismological Laboratory says.

"The activity in the past week is more than in previous months combined."

It's a bit confusing because it appears 2 earthquakes of 4.5 magnitude have been reported over the past month, and the map below is for a 4.5 earthquake recorded on Dec 3, 2014

Well, it's not the big one but it is the West Coast.

I think we are more in danger of rising tides than any monster earthquake in BC.

Location of a 4.5 magnitude earthquake off the coast of Vancouver Island on December 3, 2014.

The federal agency that monitors earthquakes in Canada says no damage or tsunami was expected nor were tremors felt as a result of the event west of Port Hardy, B.C.

There is a lot of paranoia out here in Lotusland about the big one that supposedly is overdue.

Well maybe yes, and maybe no, depending on who you consult.

It's kinda like a large passenger jet in that flying is probably the safest way to travel, but when there is a crash a lot of people's lives are lost all at once.

No tsunami expected after 4.6 earthquake rattles Tofino, BC

John Cassidy of Pacific Geoscience Centre says it could be felt as far away as the Sunshine Coast. He says it’s the largest on shore earthquake felt in the west coast of Vancouver Island since 2000.

Plenty of those little ones means that the doors in my place don't sit straight and some of them now swing closed on their own (in the same way that a refrigerator door always closes).

I was just on Van Isle for the weekend but the big one din't hit. Whew!

No damage has reported from quake which struck around 12:35 a.m. PT 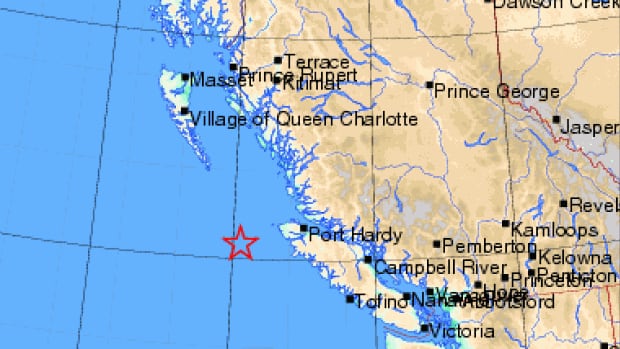 The 4.9 magnitude quake struck around 12:35 a.m. PT off the northwest tip of Vancouver Island. (Earthquakes Canada)

First quake in Idaho near B.C. border was felt in Kootenay communities of Castlegar and Creston

The first quake, which measured 4.2 ML, struck just south of the border in Idaho around 10:43 p.m PT Thursday. It was felt in the Kootenay communities of Castlegar and Creston.

It was one of three small quakes in the area since Thursday night, according to the U.S. Geological Survey.

The second quake, which measured 6.1 ML, struck in the ocean just off the southern tip of Haida Gwaii at 6:56 a.m. PT Friday.

The quake was felt on Haida Gwaii and along the North Coast, but there was no damage reported and no tsumami warning was issued.

Not far from Anchorage!

This is not just science -- it is also political and economic. Earthquake science, mitigation and preparation is very much related to economic inequality. Countries that can aford to be better prepared lose less in earthquakes for the same comparable event. Even within a country wealthy and poor have different outcomes.

The science will favour the countries able to afford the best it can offer.

A strong earthquake shook volcanic islands between Alaska and Russia yesterday in the northernmost part of the Pacific Ring of Fire.

The epicenter was located in the Rat Island of the Aleutian Islands at a depth of 19 kilometres (12 miles) and 93 kilometres (58 miles) northwest of Amchitka, Alaska.

A tsunami was not expected from the quake, according to the U.S. Tsunami Warning System.

‘We should expect more quakes’: a top seismologist on California’s tremor

10 second warning for 6.4 shake for 3 million residents close to the California Oregon border