What are you listening to Part 'You Linear Thinkers ... Arrrghhh' | Page 7 | rabble.ca

What are you listening to Part 'You Linear Thinkers ... Arrrghhh'

Van Morrison - A Sense Of Wonder

These are the days~Van Morrison

In 1948, a plane carrying 32 passengers crashed in the Los Gatos Canyon, California killing everyone on board. The media, including the New York Times, listed the names of the pilots, the flight attendant and the immigration guard but all 28 of the migrant workers (braceros) were labeled as deportees. This angered folk singer Woody Gutherie who wrote a poem about the crash. Almost ten years later, school teacher Martin Hoffman composed a melody to Gutherie's poem and that song became well known with covers by the likes of Johnny Cash, Joan Baez, Pete Seeger, Bob Dylan and many more.

Around 2010 Central Valley writer Tim Z. Hernandez discovered the story and soon began a project of finding the names and surviving relatives. Soon after musician Lance Canales joined the journey and composed his own version of the legendary song with Hernandez reading all the names of the deceased workers. Thanks to a fundraiser spearheaded by the two artist a new head stone has been built in the Holy Cross honoring all 32 passengers.

..another version of the song

..at the end of the fearless city summit there was a dinner and dance. this band provided the music.

Sons Of Kemet - Your Queen Is A Reptile

..rbc is one of the banks profiting 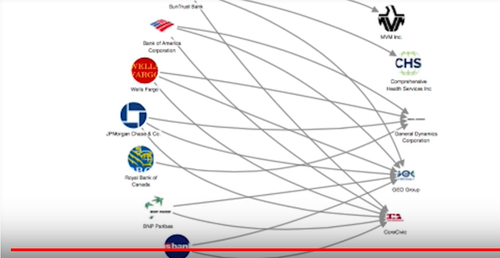 Not Dark Yet - Bob Dylan

..at around the 3 min mark this video transforms as is among the most powerful performances i have ever seen, heard and felt.

Aretha rules.  Here is one of my favourite disco era songs even if I still think disco sucks.

I listen to recordings of Mandarin Chinese lessons and conversations. Not music. I seriously doubt that listening to music would help anyone think outside the box as suggested by the opening title of this thread. Actually, I doubt you could do anything to stimulate cross linear, non-linear,spherical, left vs right brain thinking.

I suspect that after you graduate through a typical school system, something in your brain dies forever and there's no going back. LOL!

..txs krop. i never hear that before. nice suprise.

..yes think. made famous via the blues brothers.

"Mary, Don't You Weep" is from the 1972 album "Amazing Grace" by Aretha Franklin.

It ultimately sold over two million copies in the United States alone, earning a Double Platinum certification. As of 2010 it is also the biggest selling disc of Aretha's entire fifty year recording career. The double album was recorded 'Live' at the New Temple Missionary Baptist Church in Los Angeles during January of 1972. It won the 1972 Grammy Award for Best Soul Gospel Performance and also stands as the biggest selling pure Gospel album in history.

A film documenting the making of the album is set to be released in 2010.

Personnel featured on the recording:

The Ink Spots - We three

..i am woman was created in response to manish boy.

Robbie Robertson of The Band on playing with Bob Dylan

Entrance - Not Gonna Say Your Name

I've been learning drums the past 2 years or so, and this video of Bernard Purdie teaching how to do the "Purdie Shuffle" is about the most joyful, uplifting video I've found on youtube.   For a while I'd watch this near daily as a pickmeup.   He is one happy man, and a great drummer.

We Are Here · Sharon Burch

Winnipeg-based Mobina Galore signature sound is a musical hybrid of punk, alternative and pop. CBC Radio 3 named the duo one of the Top 15 Punk Bands in Canada of 2015.

In times like this... I tend to reach back to my family's songs and find something appropriate. In this case... I didn't have to go to far to find this beautiful little song. It was truly one of the last songs Grandpa Woody ever wrote. My father Arlo found the lyrics scribbled down on a piece of paper and translated them into these two short verses... then put them to this melody... so beautiful... so soothing... assuring.. peaceful... I thought we could use a bit of this today.

Morocco has occupied the Western Sahara since 1975 in defiance of the United Nations and the international community. Thousands have been tortured, imprisoned, killed and disappeared while resisting the Moroccan occupation. A 1,700-mile wall divides Sahrawis who remain under occupation from those who fled into exile.

Get ready for fighting!

We are the revolutionaries!

And the Sahrawi free land is for Sahrawis!

The Sahrawi people today have scored,

And in the war of independence, they crushed the imperialists

The famous 'Festival au Desert', more than ten years was held at Timbuktu was in April 2012 forced to quit after the violent raid by Islamists in northern Mali. Along with the 'Festival sur le Niger' in Segou and the desert festival in southern Morocco 'Taragalte' pull these three festivals as a cultural peace caravan through the world with a passionate cry for peace.

Ane Brun - Do You Remember

Sweet Honey in the Rock: Ballad of the Sit-Ins

I somehow ended up with both this thread and the previous thread open, It is going to take me forever to work through all these threads. I think I had better work my way backwards. Don't know which thread I found this in but LOVE it.

Before that I was listening to these.

I always play this one next, they were meant to be together.

Some of the links I followed were dead and the poster had not included title and artist so I couldn't do a search.

I made it all the way back to 302 before finding something related to what I listen to, Van Morrison, but not A Sense of Wonder. The Moondance album with Into the Mystic, Moondance, Crazy Love.

Google played a joke on me this morning. I ask it to play me happy music in the morning which usually gets me some light pop until I decide what I want to listen to. This morning it played me marching music lol. It so startled me that I forgot to say Hey Google before yelling STOP THE MUSIC.

In the sweet silence I requested Sara, and Dream among others from Fleetwood Mac to recover from the shock followed by Paul Simon, Graceland album. (Boy in the Bubble, Diamonds on the Soles of her Shoes, Under African Skies, Homeless with Ladysmith Black Mambazo.

Nina Simone - Nobody's Fault But Mine (RocknRolla Soundsystem Edit) so I have an epaulo tune to add to my playlists.

Oooooo, I want to go to this party!

Also epaulo, what a surprise that I already know this one.

Of course I am familar with Marvin Gaye but good pick, tons of good stuff but Mercy Mercy Me is another fav.

From LeftTurn I am adopting Grace Petrie, Black Tie, and maybe more when I have a chance to listen to more of her tunes.

Again epaulo, I love it -  John Prine and Iris DeMent - In Spite of Ourselves

I wish this was on Spotify.

We share an appreciation for Marvin Gaye and John Fogarty.

I will not link to Youtube because the sound is awful. You must listen to:

Bajofondo is a Río de la Plata-based music band consisting of eight musicians from Argentina and Uruguay, which aims to create a more contemporary version of tango and other musical styles of the Río de la Plata region.

I have no idea what the lyrics mean and I don't want to know.  I made the mistake of translating a foreign song once and it ruined it for me.

Innes coauthored a 2016 study that found music-listening could boost mood and well-being and improve stress-related measures in older adults suffering from cognitive decline. Her study compared the benefits of music to those of meditation—a practice in vogue for its mental-health perks. She found that both practices were linked to significant improvements in mood and sleep quality. “Both meditation and music listening are potentially powerful tools for improving overall health and well-being,” Innes says. If the idea of listening to music seems a lot more practicable to you than meditating, these findings are great news.

Morning chill but get going

Artist LP, tunes Suspicion and Lost on You

Music is so inherently universal in human cultures you almost don't need a study. Because I can't resist promoting my culture here is a Valley acoustic group with Juno awards. The first link is a song from the recording sessions and the second, a making of the album video, states the same thing as the studies but with more artistic flare.

Sona Jobarteh is from a West African Griot family. Griots are traditionally musicians and koraplaying has a long traditions of passing on from father to sons. Sona is the first female in her family to break with that traditions.

“The Show Must Go On: The Queen and Adam Lambert Story.”

Notes from Lennon Legend DVD:
Directed by Simon Hilton in 2003, “Working Class Hero’ was filmed in Liverpool – at John’s childhood school Dovedale Primary, Strawberry Fields, and John’s childhood home ‘Mendips’, which had recently been acquired by Yoko and donated to the National Trust.

..the royally oilygarchies got to go

"Light in Babylon" is a music group from Istanbul. I have met them in October 2012 performing in Istiklal Caddesi. Their performance is very impressive.

..i was 22 yrs old when this came out. it paralleled my entrance into left politics. the concept of revolution seemed everywhere and possible. imagine.