Thanks, Soviet people, for your courage and sacrifice, in the battle considered as the turning point in the Second World War: 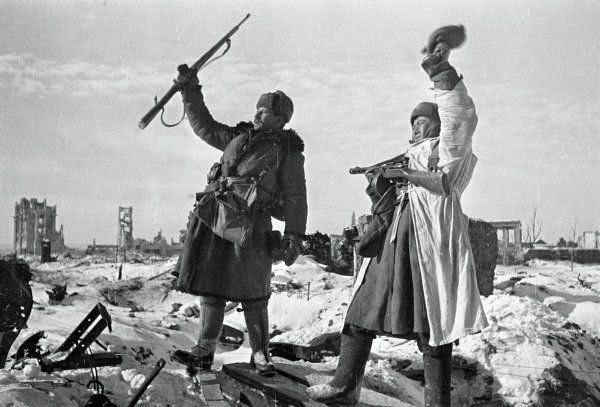 Wonderful, lagatta, thanks for this reminder of how much we owe to the heroic Soviet people. Unimaginable sacrifice. 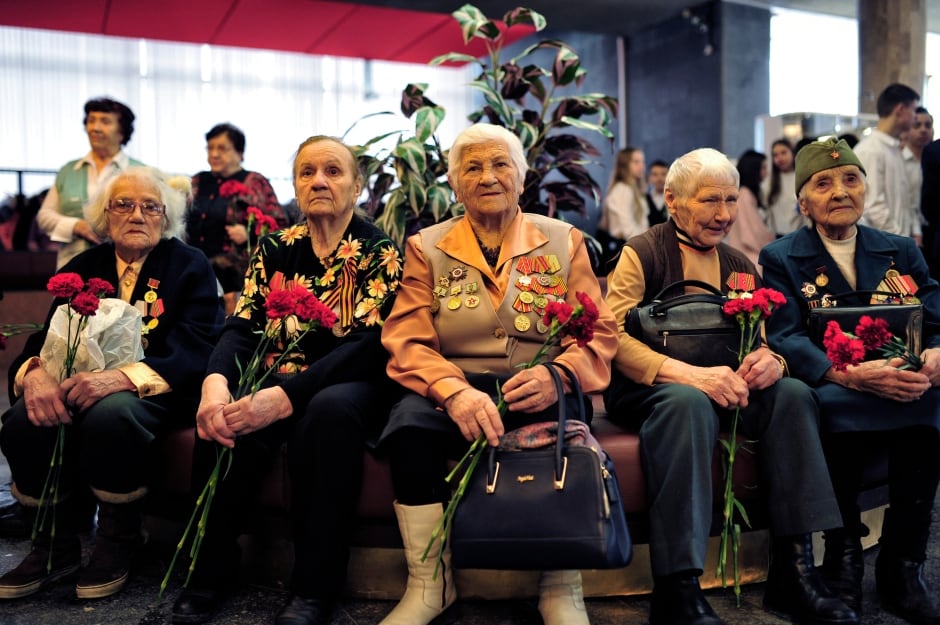 Thanks to you, Unionist - I hadn't happened to see that photo report.

In the film ¸¨Barbarians ,etc.¨with Judd Law you wonder what motivated the German soldiers. Belief ? That the Soviets were such a threat to Europe?  That Germany must control  the East? Or blind unquestioning faith.  They were constripts.

I don't agree that the Red Army saved us Canadian here in Canada on the other side of the Atlantic.

We were never threatened neither in WWI or WWII or the Cold War. Our leaders lied.

Actually they wanted to get the hell out of there. That battle was lost the moment they were encircled. There was a very good German documentary, appropriately titled Stalingrad, which interviewed survivors from both sides. Paulus and other officers told Hitler they should retreat, but he refused to let them do so. He even refused to send reinforcements because he didn't want to take troops away from the drive toward the Baku oilfields. For the most part, people back home knew nothing of what was happening there.

And Rikardo, without the breach of the Molotov Ribbentropp pakt, and the opening of a second front, there is a good chance Britain would likely either have fallen, or been forced to sue for peace. People downplay the role of the Soviets in that war; for that matter they are barely aware of the role of the Chinese, who also lost tens of millions.

I do wonder how it might have played out - on both sides - had that city not been named for Stalin.

Roads to Moscow, by Al Stewart, posted in honor of the heroism of the Red Army troops and the unjust end some of them came to    https://www.youtube.com/watch?v=dcFs8vKtFgQ:

Yes, that is in the same arc as his song "On the Border". Sadly, also non-Russian anti-fascists also wound up in Stalinist camps, including a lot of German and Austrian leftists targeted for death by the Nazis. But that is why I am honouring the Soviet people, not the Soviet state, though there were some glimmers that remained in those dark times.

Yes, that is in the same arc as his song "On the Border". Sadly, also non-Russian anti-fascists also wound up in Stalinist camps, including a lot of German and Austrian leftists targeted for death by the Nazis. But that is why I am honouring the Soviet people, not the Soviet state, though there were some glimmers that remained in those dark times.

If Canadian progressives truly honour the immense sacrifice by 'the Soviet people' in smashing the Nazi war machine, they should stop supporting a virulent official Russophobia and support for Ukrainian fascism.

It is "Russophobia" simply to be anti-Putin?

I agree that the West shouldn't be meddling in Russia's internal affairs and that it's not our place to try to bring the guy down, but it's not as though there's any chance the actually existing ruling party there is ever going to be progressive or democratic, is ever going to stop being anti-Muslim, homophobic, Great Russian Nationalist and militarist.

And as to Ukraine, both sides in the conflict are driven by nothing but reactionary nationalism, so what decent position is there for an anti-imperialist to take on that but disgusted neutrality.

You might as well face reality, NDPP-there is no moral difference between Vladimir Putin and the tsars.

Russia as a country shouldn't be hated-no country should be hated-but revulsion at those who lead Russia is not in any sense hatred of the country or the people.

(I'm in agreement with everything else in that article).

I also agree that many people here don't appreciate the many achievements of the Soviet Union, some of which continue in post-Soviet Russia (and Ukraine, and some other former Soviet republics). Making a largely illiterate - and huge - nation one of the best educated societies, and fostering a love of culture not often seen in more affluent western societies. I've been listening to beautiful Russian music on Radio-Canada Ici Musique (the equivalent of CBC-2), with the deep sonorous voices that suit this bitter winter here. I have a Mexican friend and colleague who studied Russian in Moscow, and while I was much happier with the weather during my years studying in Italy, she loved the congeniality of the Russian people and their ability to break into song, including classical choral music. The fact that she and her Russian husband later moved here rather than somewhere warmer means that she must not hate winter as much as I do! I do wish I could speak  Russian or another Slavic language, but I have other priorities, mostly bringing my Spanish up to professional standards...

But it is perfectly possible to dislike a country's political leadership and not despise the country or its people and peoples. I have quite a few friends from Chile and Argentina, but the reason they came to our frozen waste (no, they weren't from south Patagonia) was not only dislike but utter terror with respect to the dictatorships at home.

I also agree that the Canadian government should not be supporting Ukraine.

How about we turn that around, NDPP? Respect for those who died at Stalingrad doesn't mean buying the "bulwark against fascism" propaganda as a front for a bunch of gangsters.

... any more than acknowledging Zukhov's victory there (and the more important sacrifice of the people) means respecting the fact he told his soldiers to take revenge by raping and murdering civilians on the way to Berlin.

Neither the cold war, nor the tensions since 1992 have been one-sided. If Canada shouldn't have trainers there, well Russia should have its regular troops, tanks and anti-aircraft guns out of there too.

Excellent discussion! We definitely needed another debate thread on "Russophobia, yes or no?" It's just so hard to resist such a fascinating topic!!!

I am alive today solely because of the heroic struggle of the Soviet people, and countless others around the world, against Nazism and fascism. So thank you yet again, lagatta, for reminding us to celebrate that sacrifice and learn its lessons.

Yes. It is kind of funny how it always winds up getting sidetracked into that.

Frankly some of us have a hard enough time using words like "glorious" about anything that really was a terrible bloodbath. Yes I am glad they prevailed. If it hadn't been a case of two madmen caring more about their own reputations than their people there probably would not have been such a horrible death toll.

Unionist, so your parents came here after the War?

Excellent discussion! We definitely needed another debate thread on "Russophobia, yes or no?" It's just so hard to resist such a fascinating topic!!!

I am alive today solely because of the heroic struggle of the Soviet people, and countless others around the world, against Nazism and fascism. So thank you yet again, lagatta, for reminding us to celebrate that sacrifice and learn its lessons.

I salute the Soviet people and the Red Army for their heroism in those days, and hope nothing I posted above gave you reason to think I didn't.

The sad thing is, of course people are going to use tragedies like this to further their own agenda, or as cover. The Remembrance Day racket is built on this stuff.

"and the release of the film on the eve of the 75th Anniversary of the Battle of Stalingrad is a spit in the face of all those who died there, and all those who are still alive"

Sorry, no satire or criticism in 2018 because Stalingrad.

Today is also the International Day commemorating the victims of the Nazi genocide of Jews, Roma and other human groups. Important never to forget the victims of genocidal hatred now that few adult survivors remain.

Unionist, so your parents came here after the War?

Thanks again, lagatta, for remembering this history. I had lost track of this thread. Yes, my parents survived, against all odds, and immigrated to Canada some years after the end of the war. Lucky me.