The Disaster isn't Coming. It's Here

"Here's the reality. There's no housing in Toronto. We've lost about 1,000 shelter beds since COVID-19 began. Thousands are now at risk of eviction. Hundreds more are sleeping in tents, and the government isn't even providing them with water. The disaster isn't coming. It's here."

The Federation of Metro Tenants' Associations (FMTA) cheered the Ford government's decision Friday to freeze rent increases for 2021, but said it would keep fighting to protect renters from eviction while Ontario battles the COVID-19 pandemic.

“While we're excited for this victory, we're still trying to ensure that no one gets evicted in Ontario during the pandemic and fighting for rent support for renters,” the group said in an emailed statement.

The group was responding to word from the office of Housing Minister Steve Clark that Premier Doug Ford had directed him to introduce legislation in the coming months that would ensure the vast majority of households do not see a rent increase next year.

“Our government is announcing our intention to stabilize rents for Ontario’s 1.6 million rental households,” Adam Wilson, a manager of issues and legislative affairs in Clark's office, said in a statement, adding they will engage with both landlord and tenant groups on the bill.

The maximum allowable rent increase for rent-controlled units was due to be 1.5 per cent in 2021.....

The move comes as landlord-tenant proceedings begin to ramp up at city courts after months of closure due to the coronavirus pandemic and a statewide moratorium on evictions that ended on Aug. 31 despite calls to the Pennsylvania legislature to extend it from Gov. Tom Wolf.

But while some restrictions remain in place, the Tuesday reopening of courtrooms means at least some eviction orders could — in theory — move forward. The local eviction restriction will add a layer of protection for tenants who are not protected by a Centers for Disease Control public health order blocking certain evictions announced last week. The CDC order is intended to prevent an anticipated avalanche of evictions due to economic stresses caused by the pandemic and related shutdowns. Homelessness and displacement increase the risk of spreading virus and are linked to poor health outcomes..... 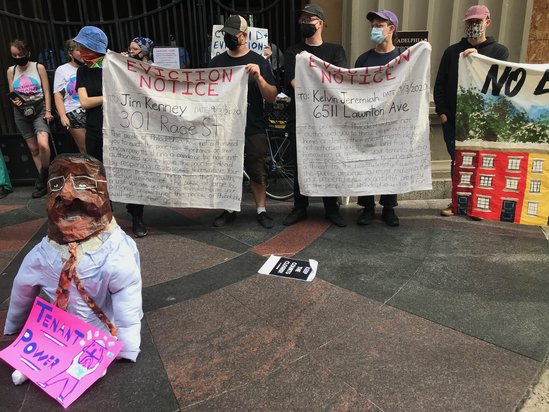 We must stop the Tories ending the eviction ban

As the new deadline for the end of the eviction ban looms, hundreds of thousands of private tenants who are in rent arrears could lose their homes in the weeks and the months that lead into winter and the new year.

A ban on landlords kicking out renters if they fall behind on bills was put in place in March 2020 during the coronavirus lockdown.

The ban was extended by a further two months in June and then again at the last minute for a miserable 4 more weeks in August with a fast-approaching end date of September 20th. The extensions have only come about from public pressure, and in reality the government is just kicking the ball further down the street.

According to the housing charity Shelter, 227,000 people fallen into rent arrears since the start of the pandemic and are at risk of eviction when the ban is lifted. The District Councils Network, which represents some local authorities, has put the estimate at 500,000 people.....

In a historic victory for unhoused people, Philadelphia city officials agreed to hand over 50 vacant homes to a community land trust, following months of organizing and protest encampments. We hear from one of the organizers and speak to Philadelphia-based Keeanga-Yamahtta Taylor, who has written extensively about housing insecurity and says the direct actions there are applicable across the U.S. “This dynamic exists all over the country where you have both empty housing and houseless people, a completely irrational expression of what American capitalism means,” Taylor says. The sustained movement in Philadelphia established “a model for what all tenant organizing and activist groups should be taking up, which is occupy the space, occupy the properties and put political pressure on public housing authorities to do their job and house people that are unhoused.”

In New York, over a dozen housing activists were arrested Thursday as hundreds of protesters took to the streets demanding local lawmakers take action on a full eviction moratorium and tenant protection during the pandemic. New York Governor Andrew Cuomo has failed to extend a pandemic eviction ban, which expired yesterday as rent came due.

Housing must be a right not a commodity. Despite it's endless speechifying about 'how much we care,' NDP BC remains a barbaric bourgeois disgrace where the poor are endlessly squeezed, tortured and ignored.

"People could freeze to death if action not taken soon, residents and MPP say."

This year’s guideline is lower than 2020’s 2.2 per cent increase, but comes after the province mandated a rent freeze in 2021 in response to the COVID-19 pandemic.

Rentals.ca says the average rent in the Greater Toronto Area sat at about $2,167 per month in November, and in the city alone is projected to hit $2,495 per month by the end of the year. 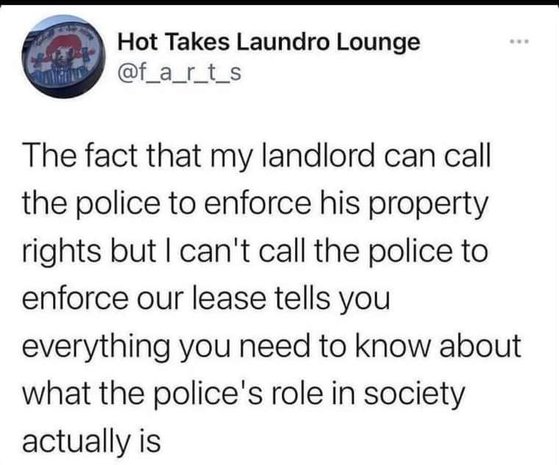 A Saint John renter on a disability pension and his wife are hunting for a new place to live after receiving notice of a 61 per cent rent increase from their new landlord and instructions to begin shovelling snow from the entranceway to their apartment themselves.

Sixty-four-year-old Douglas London and his wife Anne have lived at 123 City Line for four years. The building was sold in early December to a numbered Ontario company.

Within days, notices of a $380 rent increase and the termination of snow removal around the building were placed in their mailbox.

The Londons are among a growing number of long-term New Brunswick tenants being hit with substantial rent increases this winter after the province announced in November it would not join other provinces in setting a limit on what landlords can charge in 2022.

Toronto's housing and shelter options are on full display. 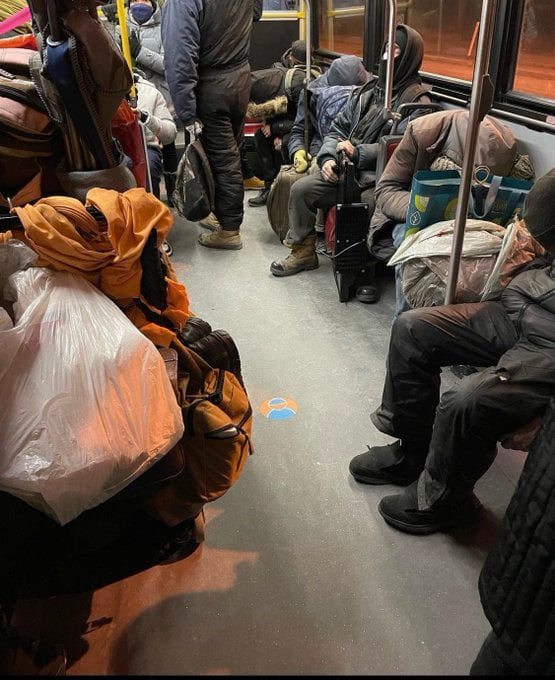 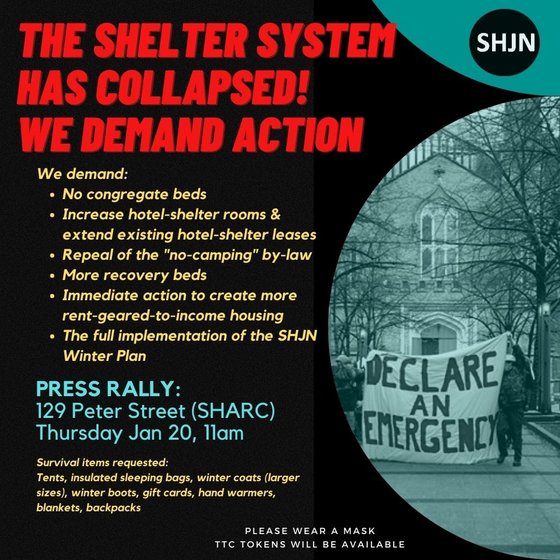 Tenants and labour have fought hand in hand throughout the history of so called British Columbia to create change that benefits worker & renters alike. Right now, people in BC are facing the reality of rents that are rising much faster than wages, with little security against abuses such as renoviction. We strongly believe that real tenant unions with real collective bargaining power are the strongest step to building real security & real capacity for renters rights.

Workers deserve a union in the home as much as they deserve a union on the job. Collective bargaining & tenant unions are the best way to build power & solidarity between renters and labour. Tenant unions will protect our communities by putting the power back in tenants & workers hands to secure their housing & neighborhoods....

..another pic from new york 1932. olinville is in the bronx. 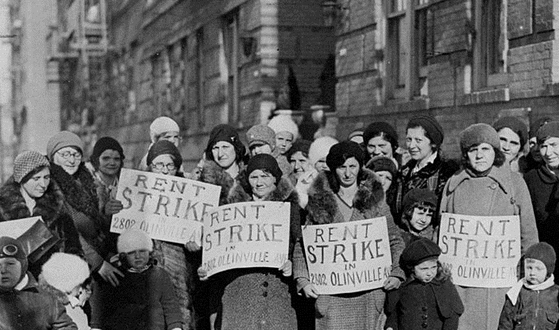 A Bronx-based tenants rights group says members are ready to put their bodies on the line to stop evictions, as cases mount in a borough with more tenants removed from their homes in recent years than anywhere else in the state.

The group, a division of the organization New Settlement, is also recruiting volunteers to visit Bronx residents who received eviction notices and inform them of their right to an attorney and their ability to stay in their apartments until a judge orders them out.

“Our goal is to intervene and disrupt the eviction process,” Estupiñan said at a rally outside Bronx Housing Court. “We’ve always known the eviction moratorium is a temporary measure [but] it made it possible for our members to dream of a world without evictions.”

He said the organization has been consulting with other tenants’ rights groups across the city, including Brooklyn Eviction Defense, which occupied a Crown Heights stoop to prevent marshals from evicting a family who accused the property owner of stealing their deed. The protest garnered significant attention and was joined by elected officials like Attorney General Letitia James and State Sen. Jabari Brisport. Activists have engaged in similar actions in residential communities, including Maspeth and elsewhere in Crown Heights, during the COVID crisis.

“The pandemic helped radicalize people and made it really clear who has the power,” Estupiñan said. “The Bronx has been the epicenter of the eviction crisis.”.... 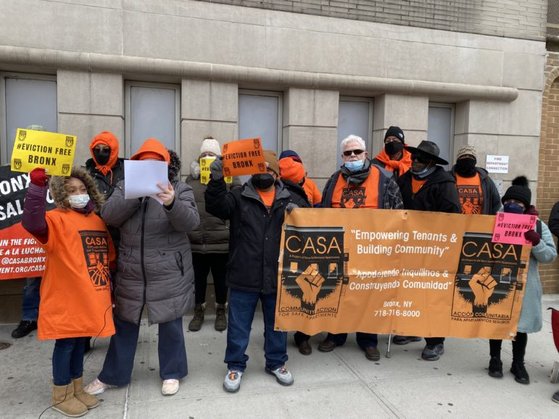 The challenges of tenant unionism in British Columbia

Rankandfile.ca reached out to RSB to learn more about the housing situation in British Columbia. We also wanted to know more about why and how of collective bargaining and union organizing rights for tenants.

We put a series of questions to the organization, and the members of RSB’s “Research and Coordinating Working Group” provided these illuminating and insightful responses.

It is a long interview but we published it in full so Rankandfile.ca readers can study it in detail......

'It shouldn't be this hard': Vancouver rents have jumped 23 per cent since last year 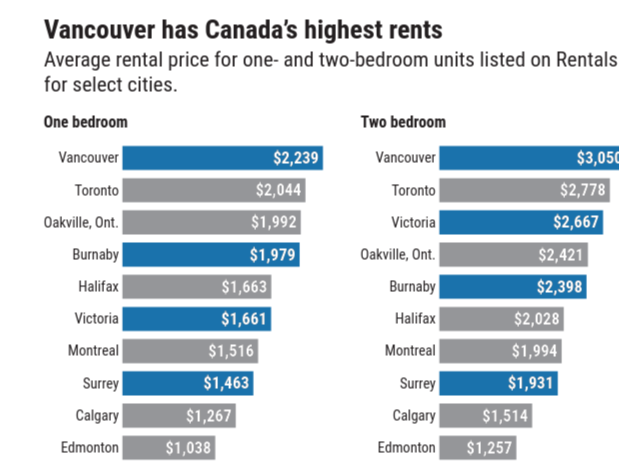