Drones being used and attacked

US sending troops to Middle East

One family’s endless horror in Syria 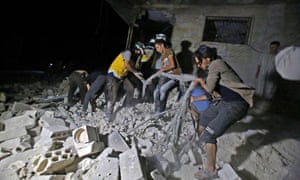 US president expressed concern over escalating violence and a desire for Moscow to end support for Syria government.

'We have nothing left': displaced Syrians wait out war in Idlib

With the closed Turkish border behind them and Russian-backed forces at the horizon, Syrians have nowhere left to run​ 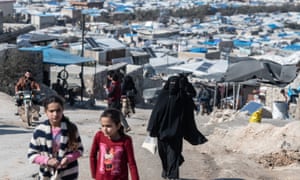 Displaced Syrians walk on the road in Atmeh, in Idlib protectorate, the last area of Syria outside Assad’s authority. Photograph: Burak Kara/Getty

The chemical weapons watchdog has concluded that the Syrian air force carried out three attacks in March 2017 involving the nerve agent Sarin or chlorine.

"...Two OPCW whistleblowers came forward last year claiming inconsistencies and suppression of evidence in that investigation, of which they were a part. They were supported by an additional two informers who have since called into question the OPCW's integrity and handling of the controversy.."

The people who believe in the objectivity of international institutions are funny, the ones who manufacture that perception are even funnier.

As Netanyahu's Coalition Deadline Expires, Lapid Seen Likely to Get the Nod

"We hope Russia's efforts will help..."

Lapid says unity government is not a compromise, but the goal ■ Bennett, slated to become prime minister in the new ‘unity’ government, says Netanyahu ‘slammed the door shut’ on right-wing alternative

Why You Should Support Boycott, Divestment, and Sanctions Against Israel

SANA said 6 others were wounded and a civilian plastics factory was hit during the pre-dawn attack in northwest Syria.

Karl nails it as is usually the case.

Truly a sad state of affairs. Come on America, come on Mr Biden, you can do better than this, eh!

Fuck Bibi, let's have a 2-state solution, and as John Lennon would say, Let's Give Peace a Chance, eh!

‘Mowing the Grass’: Last Round for Israel’s Strategy

The two state solution is a bad idea. It will leave Palestinians as a weak vassal state with no way of defending themselves, because the Israeli's will never allow them to have a real military. It also leaves the apartheid Basic Law that defines Israel as the Nation-State of the Jewish People in place for the millions of Israeli Arabs who should also be entitled to equal rights.

I don't disagree but I still think it is a disaster in the making. If the Israeli settlers who are living in the occupied territories are forced out or leave because of the change that too is ethnic cleansing and you've got to know the Palestinians stuck inside Israel will suffer the consequences. Part of the violence we are seeing is terrorist settlers going into Israel to conduct pogroms, imagine what they will be like if they are forced out of their homes.

I know you are a decent person, and you could not have meant this as it sounds. However, it reads as if you are urging the world outside Palestine to enable and cooperate in the ethnic cleansing of Palestinian Arabs by allowing them to emigrate, rather than demand their rights where they were born. You didn't mean that, did you?

I see your point but I also think that Palestinians should not have to continue living the way they are living and I also don't see a peace deal anywhere in sight. I think Palestinians should have more viable choices for normal futures. The Israeli-Palestinian conflict looks like it's going to continue destroying the lives of Palestinians and I think Canada could unilaterally do things to help Palestinians without depending on the actions of other countries.

...After a 'lawn mowing'  systematically ensuring Palestinian dying will continue. With the support of Canada and 'the international community' that did nothing to stop it.

'In the last 5 decades of the Arab world, secular liberals have been the main enemies of liberal types of political democracy, mostly because they sort of support electoral democracy as long as they win but turn against it if Islamists win..."

No 'real change': Trudeau's militaristic approach to the Middle East

"What the Trudeau government has actually done while in power stands in direct contradiction to its stated aims in the region and resembles little more than a rhetorical counterpoint to the Harper years...Indeed, if these policies continue, it signals that the world assuredly does not 'need more Canada', but less of it."

Because both took their marching orders from the same imperialist overlords.

US 'Airstrike Diplomacy' Continues in Syria-Iraq

"The attacks were condemned by  both the Syrian and Iraqi governments and represent not only a dangerous escalation of American military aggression in the region, but the continuation of US aggression in the Middle East spanning two decades regardless of who occupies the White House or Congress..."

Should US forces remain or leave the Middle East?

"The feasibility of US forces remaining in the Middle East or their departure and the price they must pay for the consequences of the decision is at the centre of discussion...The idea of freeing the Middle East from the US military presence is opposed by those who claim that US forces must remain to protect US allies, especially Israel..."

'The US government is waging relentless war on the people of Syria, Iraq, Iran, Yemen, Lebanon etc' (and vid)

"Rania Khalek explains how the US military and its Kurdish proxies are occupying 1/3 of Syria, including its oil and wheat..."

What we know so far about Tunisia's political crisis

"...The announcement was condemned as an attack on democracy by his rivals but was greeted by others with celebrations on the streets across the country. Protesters demanded the government's removal after a spike in COVID-19 cases that aggravated economic conditions..."

It seems that one party states, that are democratic internally, are what people want. On the surface this description sounds like they want to recreate Libya, Iraq and Syria's governments but with more democracy and less corruption. Interesting ideas, I tried cutting and pasting a quote but it didn't seem to let me.

Lebanon is under maximum pressure and the target is Hezbollah; Iran sends its support

"What Lebanon is suffering from is the result of decades of corruption by the US 'friends' who held the political power in the country. The downgrading of Lebanon is primarily due to the US and Israeli interventions and interference in this country. It should be borne in mind though that the flow of Iranian oil imto Lebanon comes with several potential risks..."

All serious observers of the region know how dangerous the present confluence of forces is. USraeli machinations are the primary problem. For those not long lost in the weeds of North American msm propaganda confusion, this is a must read analysis.